Now we will take this month’s theme of readiness to a more subtle level by examining the power of intention.

Everything that happens to you and your clients represents an intention on some level. You are choosing where you are on your journey, as are your clients. Most choices are made at the subconscious level, and are played out on the level of the obvious.  It is only when we accept responsibility for all of our choices that we are truly empowered to make new and better ones.

I read a biography of a local politician named Akoni Pule, who enjoyed a very long 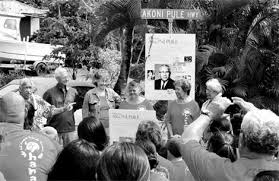 tenure in the Hawaii State House of Representatives for almost all the years from 1947 to 1965.  Dedicated and beloved, Pule worked hard to improve the road system in Hawaii and created a highway for rural workers to get to jobs at a new hotel. He also established a port that is now one of the lifeblood gateways for the Big Island.

The element of Pule’s career I found most fascinating was that, after his initial 2 years in office, he lost an election in 1950.  For the next two years he took a job as a janitor in the House of Representatives building so he could stay in the energy of politics and learn more about how to do a good job. He was re-elected in 1952 and went on to serve continuously until 1965.

I imagine it was very humbling for Pule to push a mop around the floor of the room where he had recently made laws for the state. And to clean up after the man who had defeated him for his office. But Pule’s intention to stay in politics and serve the people of his state was stronger than his ego.

I cite this inspiring story to encourage you to stay with your vision no matter what ups or downs you ride. Every career has highs and lows. If you can stay on course in spite of momentary wins or losses, you will reach your goal. One of my friends sold cars years ago. One day a big sale he was working on fell through. He came to the manager and told him of his frustration. The manager told him, “Don’t worry about one deal. It’s all in the averages.”

Years ago I was looking for a business manager. I narrowed the field of candidates down to two: one was new to the business, but enthusiastic. Another fellow had a lot more experience, so I hired him.  The first fellow told me, “I still want to work for you, so if you have any projects, let me know.”  I did have a particular project, so I put him on it, which he excelled at, under the supervision of the other fellow I had hired as the new manager.

After a few months it became obvious that the manager was failing badly. He knew how to run a business, but he lacked motivation, and he let lots of things slide that jeopardized the business. It was clear that I needed to let him go.  Meanwhile the other fellow had proven himself on the project he had taken on, so I hired him to take over the business. He did a great job and we worked together for seven years. We became good friends, and under his direction the business did very well financially, such that we all prospered.

You must challenge yourself and your clients to connect all results with original intention. While clients may initially not recognize that their intentions are behind their results, or they may actively resist, found your coaching on the principle of choice. This will empower your clients to understand via cost and payoff why they have made the choices they have made, but more importantly how to make new choices they truly value.

The Bible tells us, “He who humbles himself shall be exalted.” Humbling yourself does not mean that you need to demean yourself or put up with abuse. It means that you let Spirit, not ego, run the show, and you trust that Higher Power is supporting you in spite of current appearances.  You can and will get what you want, as will your clients. But you must be true to what you want.

All of this month’s films underscore the power of intention. Let’s allow this power to take us where we want to go, as well as our clients.

1. What has happened to you that does not seem to be your choice?

Imagine that it was your choice. Why did you choose it?

2. Consider a client who believes that something has happened to him or her not by choice:

How might this experience actually have proceeded from the client’s choice?

3.  Consider a loss or setback that has frustrated you. How might this setback be unimportant in the Big Picture of your vision, and how might it even help  you?

My life is the result of my choices.

I now choose in harmony with my true goals.

The Law of Attraction sorts everything out.

What is mine shall know my face.