Earlier this month I recommended you see the documentary film Wake Up as part of our course.  You can get the film on Netflix download or get a digital download for $4.99 at www.wakeupfilm.com

I suggest you see the film before you read below, since my comments contain many elements of the film, and you will gain more by watching the film on your own before hearing from me comment on it. 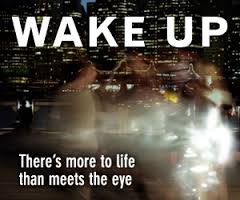 I am recommending this film because it is a real life demonstration of the classic hero’s journey as elucidated by Joseph Campbell and in Finding Joe. Jonas Elrod woke up one day to discover that he was seeing spirits, ghosts, and entities of all kinds, light and dark. Having no experience, context, or training related to such an encounter, he grew deeply disturbed and thought he was going crazy. No one in his world understood or validated such experiences. His girlfriend did her best to be supportive, but she was highly skeptical and wished the phenomenon would just go away so she and Jonas could get back to their normal life.

This moment represents the first step of the hero’s journey, the call to adventure that interrupts or even severely disturbs one’s normal life. Something bigger, exciting, mysterious, and possibly threatening calls. Once you receive the call, you cannot go backward. You cannot make believe it didn’t happen and you cannot return to the level of sleep at which you were living before. You have had the call to adventure, or else you would not be in this program.

Jonas went out searching for help, which is what the hero does when he/she accepts the call. At first Jonas went to traditional sources, close to him and acceptable to the public at large. His first interview was with a psychologist, who didn’t say so out loud, but thought Jonas was nuts. Then Jonas went to his family, who loved and accepted him, but decided he needed to be saved, and took him to their preacher. Fortunately, the preacher had space for angels and demons, since they are a part of the Bible and the fundamentalist religion.

Then Jonas went to a paranormal investigator in Italy, who took photos of the entities and explained how they work. At this point I want to comment on one of the two elements I liked most about the film. Jonas evolved from traditional, denser, more dogmatic sources of help to purer and more refined teachers, including brilliant metaphysicians, a shaman, and a Zen master. Meanwhile he became more and more sophisticated in his understanding of his process, his acceptance of it, and his desire and skill to master it.

Along his way, Jonas gained allies and encountered foes, in perfect accord with the hero’s adventure. You could take Jonas’ journey and map it perfectly according to Campbell’s paradigm.

Finally Jonas was guided to a Native American vision quest, where he had to spend four days and nights alone with himself in nature. He entered the cave that all heroes must enter, having to face himself at the deepest level of his being.

I won’t say anymore at this point, in case you still haven’t seen the film.

The last element of the hero’s journey is the return to the world to share the gift you gained from your experience. Voila, he ended up on Oprah’s Super Soul Sunday—a far progressed distance from the psychologist who thought he was nuts and the people who judged and criticized him. Meanwhile his girlfriend had her own hero’s journey, struggling to figure out how to relate to the man she loved, who was that man no more.

The other element of the film that I really liked was Jonas’ absolute sincerity and “show me” attitude. Everything he did was from his own experience and choice rather than because someone told him it was so, or it was “spiritual” or “new age.”  For example, he figured out on his own that smudging his apartment sent dark spirits fleeing out the window, since that is precisely what he saw.  His knowledge was not from books, seminars, or teachers. He had to try everything out before he believed it. We can all learn from this level of integrity.

We might further note that Jonas had his date with destiny for all of these experiences to occur. He had a soul contract with all the entities he encountered and all the people he met along the way—as we all do. The surface life he was living gave way to the greater life his soul chose. This is so for all of us, as well as our clients.

I am looking forward to discussing Wake Up with you as part of our next teleseminar on March 26. I welcome your experience of the film, your comments on it, and your applications to your personal and coaching path. How might you have coached Jonas if he were your client?  If you were him, what coaching path might you have chosen?