Ramana Maharshi:  Who am I? 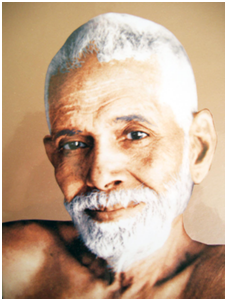 Ramana Maharshi was one of the great enlightened sages of the recent age.  He had one method of spiritual illumination. Continually ask “Who am I?”

As a boy, young Ramana feared death.  One day around age seventeen he decided to confront his fear. He lay down on his bed and imagined that his different body parts were dying, one by one, until he had died entirely in his imagination. At one point he did leave his body, spiritually, and he discovered the truth of life beyond the body. He realized that his true self was an eternal, infinite spirit. This was his moment of enlightenment.

From that point on Sri Ramana was a liberated soul. People sensed the quality of his consciousness and came to him for teaching and healing. He was mystically drawn to the sacred mountain Arunachala in southern India, and established an ashram there. Each day he and his disciples took a walk around the base of the mountain. He lived a very humble life, sleeping and eating in the same room as his disciples.

Sri Ramana’s method of self-inquiry is the simplest and yet the most profound route to illumination. It asks us to constantly consider who we really are. Are we the body?  Our vital statistics?  Our personality?  Our reputation?  Our career?  Our money?  Our thoughts? Our marriage?  Are we anything the world can see through the five senses?

Ramana Maharshi would say that we are none of these. Our only true identity is spirit. All else is temporary and unreal. Illusion. Maya. Appearance. We suffer only because we take on a false identity. We identify with what is vulnerable and painful. We identify with forms that change.  Then we feel hurt because we think we are things that can be hurt. But we are not. Our true self cannot be hurt. We are eternal.

The teachings of Ramana Maharshi are almost identical to A Course in Miracles. Although the course is written in Christian language, scholars note that its philosophy is more similar to Buddhism or Advaita philosophy, which means non-duality, oneness. The language of Advaita and ACIM is different, but the concepts are quite the same. The course tells us, “What suffers is not part of me.”  Who we are as spiritual beings is far beyond anything that experiences pain or loss. Our true nature is pure joy. When we identify with our true joy, all temporal things fall away as secondary at best, or even meaningless.

The goal of life, Sri Ramana would say, is to discover, remember, and live as our true Self. The master prescribed no rituals or practices. Only self-inquiry. If you keep asking “Who am I?” and you answer honestly, you will pass through all surface and temporary false identities. Eventually you will go deeper and deeper until you find your true Self. Then, Ramana Maharshi would say, you are home.

As a master coach, you empower your clients to heal and prosper by guiding them to their true Self. You will notice that their fears, pains, and sorrows result from them identifying with their assumed identities, roles, and stuff. They fear they will not succeed in their career; they aren’t a worthy family member; they worry that they won’t attract the right partner; they don’t like themselves as they are. If they knew who their true Self was, they would realize that it is beyond the judgment of the personality. They would fall in love with their true Self, since their true Self is love, and attract everything that matches love.

By now you have the confidence to take your clients’ hands and guide them beyond their current fear, upset, or drama. You see beyond all of these issues, and you are aware of higher ground where your client can find strength, peace, confidence, and success. Your vision is your greatest gift to your clients. See more in them and for them than they see for themselves, and your coaching with them will be life-changing for them and you.

As you keep asking, “Who am I?” you will establish  ourself in the truth and gain the power to transmit such a noble awareness to your clients. Blessed are you both for taking the infinite journey.